Writing the days of the week has been a part of the Cherokee language since
not long after Sequoyah invented the syllabary. Noting days of the week,
as well as the time of day, conveys important information in letters, notices
and official documents. Since there are only seven days to remember,
memorizing the words is not really hard. But, if you understand what
the words mean and how they have been used over time,
you will deepen your understanding of the language and of the Cherokee world.

Here are the words for the days of the week and their meanings:

Some Cherokees think that Tuesday, Wednesday and Thursday should be written
ᏔᎵᏁ ‘second,’ ᏦᎢᏁ ‘third,’ and ᏅᎩᏁ ‘fourth,’ without ᎢᎦ. The reasoning is that
since ᎢᎦ refers to day and daylight, it does not encompass the entire twenty-four hour
period. Therefore, ᏔᎵᏁ ᎢᎦ would refer only to daytime hours on Tuesday. It is possible
that this use of ᎢᎦ arose out of a desire by some to make the Cherokee words correspond
more closely to English days of the week, which all end in “day.”

2. Finding Days of the Week

Open the following documents and find one example of a day of the week for each.
Write the syllabary, the phonetic and the English for each word you find.

3. Funeral Notice for a Female Child of Gvlehwisgi: 1928

1. What do you notice about the difference between the two
different handwriting samples?

2. Do you think the purpose of the writings had anything to do
with how and why they were written? If so, explain.

4. Write three things you hope to gain by learning syllabary:

The Cherokee New Testament can also be found online here. 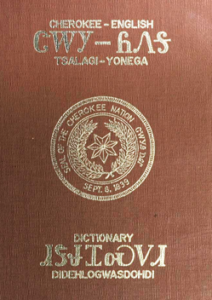 Matthew 28:1
ᎤᎾᏙᏓᏉᏅᎯᏃ
unadodagwohnvhihno/unadodaquohnvhihno
‘And in the end of the sabbath’

Practice reading the above sentences aloud.

Write the words for ‘Saturday,’ ‘Sunday,’ and ‘Monday’ in phonetics below:

For the next section you will need to use Durbin Feeling’s Dictionary.
Feeling, Durbin. Cherokee-English Dictionary.Cherokee Nation of Oklahoma, 1975.

If you don’t have a copy, you can find an online version here.

Below is a highly simplified guide for beginning to familiarize yourself
with the entries you will find in the dictionary. The first thing to remember
is that verbs will always be listed under the third person singular
(he, she or it), present tense form. So if you want to know
about the word ‘to want,’ you will look it up in the English-Cherokee portion
in the back of the dictionary, or type in “want” in the online dictionary,
and you will get a listing for uduliha ‘he or she wants it.’
In Durbin Feeling’s dictionary, it is on page 163, and looks like this:

Third person singular
ᎤᏚᎵᎭ
uduliha
‘he (or she) wants it’

Below the main entry (or across from it in the online dictionary),
you will usually see five sub-entries, and they will be
in the same order for every verb.

Third person singular, non-progressive, remote past tense:
ᎤᏚᎸᎲᎢ
udulvhvi
‘He or she wanted it’

Third person singular infinitive:
ᎤᏚᎸᏗ
uduhldi
‘He or she to want it’ (similar to our infinitive, “to want”), or ‘he or she has to want it’

Notice that every entry is written in syllabary, phonetic, and then
phonetic with markings as a guide to pronunciation. You will find more
information about pronunciation in Durbin Feeling’s dictionary.

The dictionary entries are followed by at least one sentence,
using one of the forms of the verb just given.

The word in the entry is underlined, in both the Cherokee and English,
in this case uduliha ‘he wants.’ The meaning of the sentence is given as,
‘He wants to rest,’ but it could also be ‘she wants to rest.’

Udawesolvsdohdi is the infinitive form of the verb found
in the dictionary as: adawesolvsdiha ‘he is resting.’ By itself,
it can mean ‘He or she has to rest,’ or ‘He or she is supposed to rest.’
These meanings can apply to all infinitives.

As you can see from the sample sentence, if you combine a present verb
like udliha with the infinite like udawesolvsdohdi ‘he to rest,’
you can make a sentence with the meaning ‘he or she wants to rest’:
udawesolvsdohdi uduliha.

Another interesting day of the week word is ᏧᏅᎩᎶᏍᏗ
‘Friday’ which means ‘the day when they have to wash their clothes.’

1. Is there anything in the entry similar to ᏧᏅᎩᎶᏍᏗ ?

2. How can we tell from the verb that they are not washing dishes?

4. How could we say ‘He wants to wash clothes’? (Hint: See note above about infinitives)

Look for the days of the week in the syllabary below
and mark down how many times you find each.
Check the KEY at end of module for answers.

Trying to remember is the important part of this exercise,
not getting it all right. So search your memory first,
and then you can check your work. Don’t worry if you make mistakes.
It’s just part of learning.

1. Is there anything in the entry similar to ᏧᏅᎩᎶᏍᏗ ?

If you start with the English and look up washing, the drop down menu will show,
the verb dekgiloa ‘he’s washing flexible objects’ (including clothes).
Under 3rd infinitive you will see juhgilosdi/tsuhgilosdi.
That would mean ‘he or she to wash them (flexible)’, or
‘he or she has to wash them.’ Notice it is third person singular.

2. How can we tell from the verb that they are not washing dishes?

The definition includes ‘washing flexible objects’ (including clothes),
so it could not be used with something like dishes. This is a classificatory
verb which tells you, even without mention of the actual object being spoken of,
what sort of object it is. The five classifications are:
Solid /Liquid / Living / Flexible /Long and Slender.