In Module One, we saw how Cherokees worked together to learn the
syllabary in the early 1800s. They demonstrated the idea of ᎦᏚᎩ gadugi,
which can be defined as working together towards a common goal.

In The Shadow of Sequoyah, Anna Gritts Kilpatrick writes of Oklahoma Cherokees:

“…the gadugi is composed of unpaid workers called together for a specific task in the interests of a private charity or community welfare.”

Gadugi is so much a part of Cherokee life that the word for ‘state’
is very similar, ᏍᎦᏚᎩ sgadugi.

“The word for state draws upon the word ᎦᏚᎩ/gadugi, which refers to organized teams of people working collectively for a commonly shared goal…While the English word state describes a political organization that grew from regionalism, the Cherokee word more closely matches a historical tradition of collective action.”

Gadugi can take many forms. Think about how the following examples demonstrate gadugi.

1. Dollie Duncan letters were sent from a young man in prison,
Walter Duncan, to his mother. Apparently, he was learning to write in syllabary,
but had the help friends in the meantime. At the end of the second letter
we read that Alsdawadi has been writing on Walter Duncan’s behalf :

Alsdawadi has been writing on Walter Duncan’s behalf.
Even in prison, Cherokees practiced gadugi, helping one another
to accomplish a goal, in this case, to write a letter.

2. The ECHOTA FUNERAL NOTICES are an especially poignant example of gadugi.

3. In the Governance Documents, we find the following in “Cherokee Republican Constitution”:

Read the sample sentence below for gadugi and write down any words you recognize
using both syllabary and phonetics.

We have seen that Cherokee words can have an intrusive h, an air sound
that is not represented by a syllabary character. Studying speakers when possible,
and listening to recordings can help students understand where an intrusive h is used.
Most students know also that speakers often drop the final vowel sounds when speaking
at a natural, conversational speed. In addition, vowel sounds may be dropped
within a word. For example, in the word ᎤᏅᏥ unvtsi ‘snow,’ the –v– sound is devoiced,
and the word sounds like unji/untsi. There is nothing to indicate a dropped or devoiced vowel,
so, again, it is important to listen to speakers.

In the GOVERNANCE DOCUMENTS: Keetoowah Society Notes, read the first line
under the Pronunciation tab, and write the following, in syllabary, phonetic and English:

1. A word with a dropped vowel

2. A word with an intrusive h 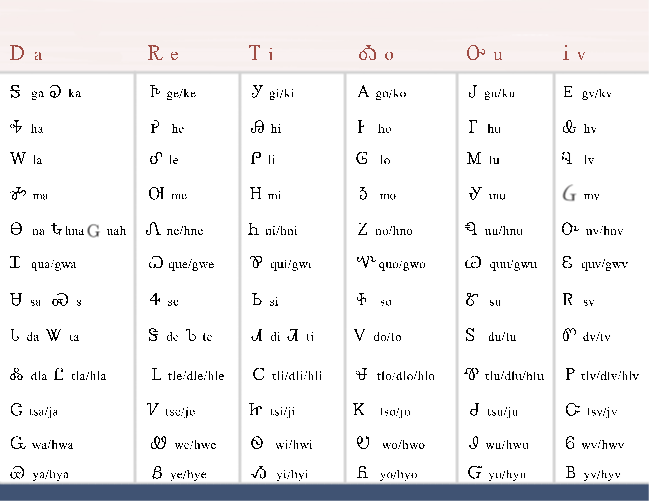 Look carefully at the words and circle what they all have in common. What does this
tell you about how the words mean what they do? Write your thoughts in the space below:

Which of these words do you think is related to the word for ‘elders’?