In this and upcoming discussions about Cherokee verbs, read and try to understand
the material, but don’t worry about trying to take it all in or memorize. All of this
material will come up again, and you can always refer back. The most important thing
is to just become familiar with how the verbs work.

Cherokee verbs are complicated because they are very specific, and they contain a lot
of information that we might need several words for in English.

There are different ways to look at and study Cherokee verbs. Different linguists may use
different terms, but, in general, all Cherokee verbs must contain at least these three parts:
The PRONOUN PREFIX, which tells who is doing what, and sometimes, to whom; the VERB STEM,
which tells what is being done; and the TENSE SUFFIX, which tells when the action takes place.
The verb stem can be broken down into more parts, but that is not necessary to our introductory
remarks here.

Notice that the prefixes are different according to whether the stem starts with a consonant
or a vowel. Notice also, that the second person double (You two), and second person plural (You all),
is exactly the same for both Set A and Set B. They are highlighted in pale green.
Once you learn those prefixes, you won’t have to worry about whether you need a Set A or
Set B prefix since they are identical.

Set A prefixes are often used with verbs dealing with actions. 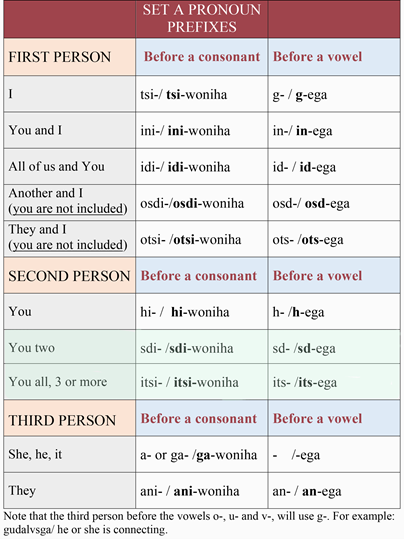 Set B prefixes are often used verbs expressing something passive, or a state. 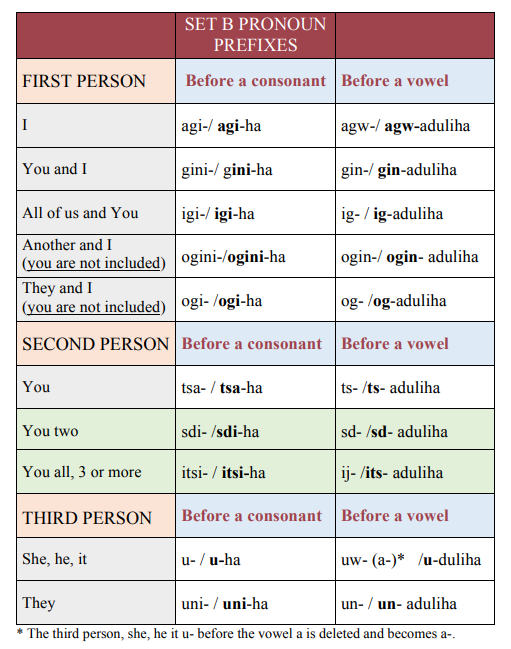 When studying verbs in Cherokee, it’s important to have a good understanding of the person
or persons involved in the action.

It’s vitally important to understand which person or persons is talking, and who or what
is being talked about, because each verb will have a pronominal prefix, as discussed above.
On the next page is a chart of first, second and third persons. To help you visualize,
I have included the following symbols:

Study the chart on the next page and compare to what you had previously thought. 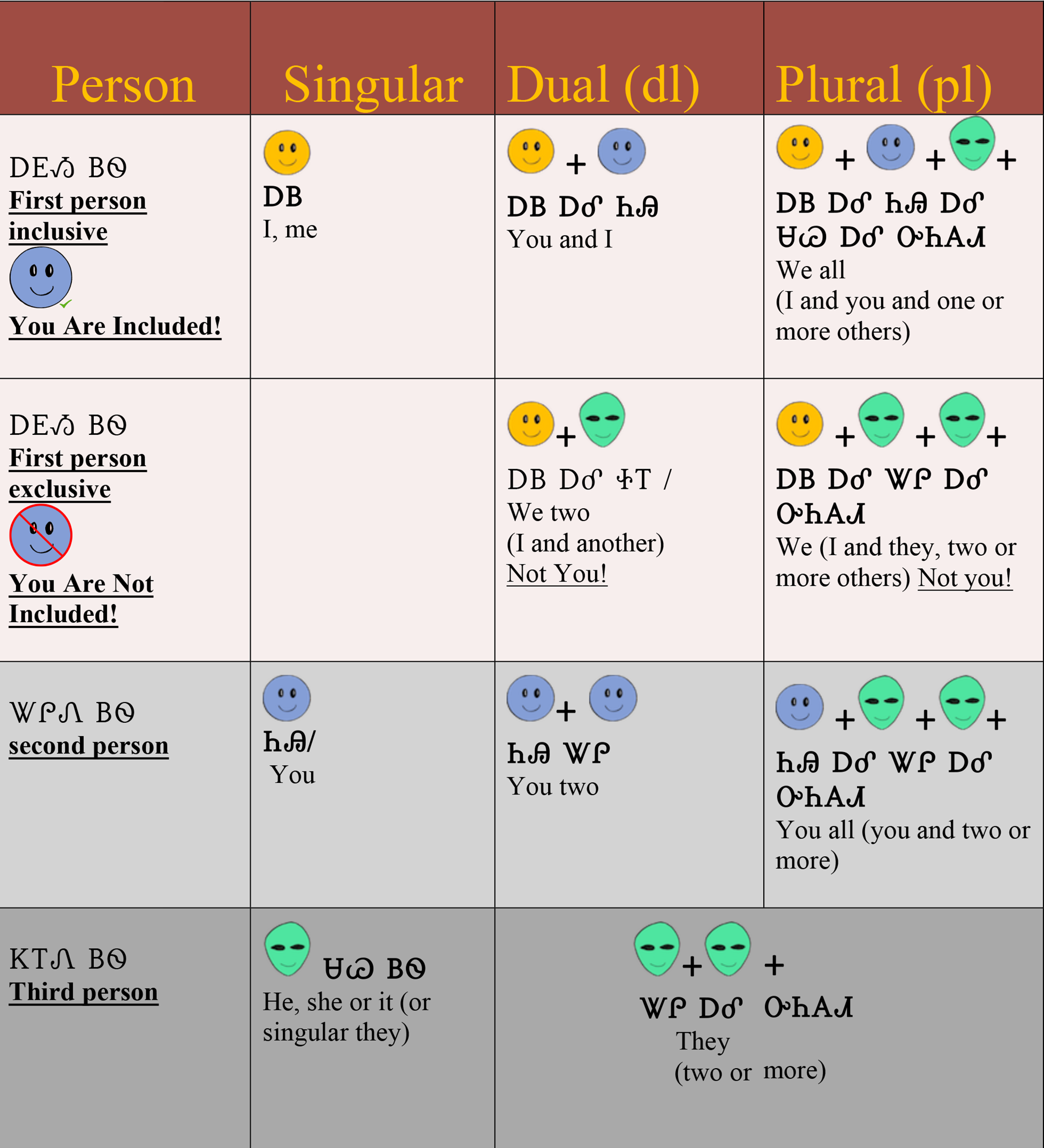 Read the following person terms and, using the chart above, identify who is being talked about:

As we have seen, all verbs in Cherokee must include the PRONOUN (or Pronominal) PREFIX.
This prefix tells who performs the action of the verb, referred to as the subject. For example,
if you see ᎯᏬᏂᎭ hiwoniha, hi– is the pronoun prefix and shows that YOU are speaking,
so YOU are the subject.

There are also pronoun prefixes which show not only the verb subject, but also the object,
the one to whom the action was done. An example would be ᏥᏯᏛᎩᎠ jiyatvgia/tsiyatvgia ‘I hear him or her.’
The prefix tsiy– shows that I did something to HIM or HER. So a single prefix shows immediately
how many people are included in the action, and specifies who did something to another, or others.

It can be helpful to use pictures to visualize the prefixes, especially as they get more complicated.
You can use similar emojis on your computers and phones.

If you look again at hiwoniha ‘you are speaking’

hi– contains the information that YOU are doing something. There is no object of your action.

When we look at jiyatvgia/tsiyatvgia ‘I hear him or her’

jiy/tsiy– contains the information in the picture above: ‘I am doing something to HIM or HER‘

If I wanted to say ‘YOU hear HIM or HER,’ it would be hiyatvgia

hiy– contains the information in the picture above: ‘YOU are doing something to HIM or HER‘

In Cherokee, the pronouns immediately picture the people involved.
In English we need a sentence to talk about this picture:
He hears it. 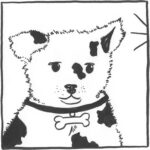 In Cherokee, you just say:

The verb stem, sometimes called the aspect stem, is not the same as the root, which is
part of the stem. You don’t need to know the root, and you don’t even need to know
the word “stem” to learn Cherokee, but it’s good to be familiar with stems because you will
come across the term in other materials. As mentioned before, different linguists and writers
may have different ways of dividing up the stem. Below is a simple way of looking at the
main parts of the verb:

Below is the verb jiwoniha/tsiwoniha ‘I am speaking.’

You are already familiar with the prefixes and suffixes from previous lessons. It would be easy
if the stem was always the same, but for each verb, there are five distinct stems, sometimes
called Aspect Stems. Please note again that this is only one way to divide up the verb.
Other authors may differ. 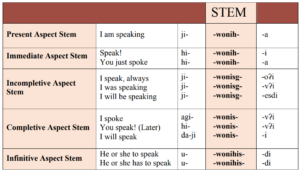 3. ‘He will be speaking on Saturday.’

4. ‘They will be speaking tomorrow.’

So, when you are looking at a verb and thinking about its tense, remember that the tense suffix doesn’t always
come last.

In the following words taken from WILLIE JUMPER MANUSCRIPTS: Story of the Old Man Willie Pigeon,
write the tense you think it is, for example, present tense, infinitive, etc. Then look up
the words in the story and write the meaning.