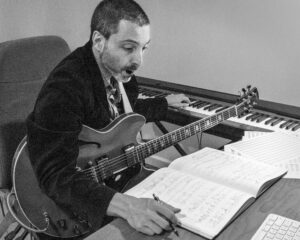 Beginning in the early 1930s, Cherokee composer and bandleader Carl T. Fischer (1912-1954) was working on a multi-movement orchestral suite called Reflections of an Indian Boy  – a project left unfinished after his sudden passing at the age of 41. While his nine-movement composition was never fully completed, a condensed version of the piece for piano was reconstructed from home audio recordings and fully orchestrated, leading to it being recorded on Columbia Records. Over a half of a century later, his grandson, Dr. Justin Morell, is embarking on a generational, musical mission of his own.

An alum of both California State University East Bay and UCLA, Morell comes from a family of guitarists, composers, and musicians, and holds a PhD from the University of Oregon. Currently, Morell teaches a variety of music composition, music theory, and orchestration courses at Lebanon Valley College in Pennsylvania as an Associate Professor in Music. Morell hopes to create an orchestral composition titled “The Cherokee Project: A choral/orchestra/jazz trumpet concerto” (working title), that encompasses DAILP’s English translations of the Dollie Duncan letters. Morell plans to use short excerpts from the collection of letters to illustrate the dialogues in a new light, promote Cherokee language preservation, and commemorate the work of his late grandfather in a creative, meaningful, auditory experience. According to Morell, the concerto will be performed and recorded by Grammy-winning trumpeter, John Daversa, and will include a number of Cherokee vocalist performers, and intends to include Cherokee instrumentalists.

In conversation with his grandfather’s music, Morell plans to include nine instrumental movements based on Fischer’s original nine movements in Reflections of an Indian Boy. They will be paired with vocal movements sung in Cherokee, and will integrate with excerpts of the historical artifacts that DAILP has to offer to emphasize Cherokee language perseverance. “The Cherokee Project” is not the first time the California native has experimented with vocalizations in his orchestral compositions; in John Daversa Jazz Orchestra featuring Justin Morell: All Without Words: variations inspired by Lore (2021), which is described as “a concerto for trumpet with jazz orchestra and choir,” Morell incorporates vocalizations inspired by his autistic non-verbal son into the music. In addition to DAILP’s Dollie Duncan letters, Morell is currently working with Dr. Sara Snyder-Hopkins, the Director of the Cherokee Language Program at Western Carolina University, to include more day-to-day historical excerpts into the project. Morell has clarified that the composition will not include any sacred texts of the Cherokee people.

Our team is thrilled to see (and hear!) the music that will come forth through Morell’s use of the translated Dollie Duncan letters, which have been graciously translated by DAILP translators and community members Clara Proctor and Ernestine Berry, and annotated by Dr. Jeffery Bourns and Aparna Dutta. (Accredited translators and annotators for all of our documents can be found under the “view details” links above each archival document on our site). Morell reached out to DAILP founder Dr. Ellen Cushman in the spring of 2021 in order to seek permission to use these documents as part of his composition. The ᎨᏳᏁᎦ ᎠᏛᎦ (Dollie Duncan) collection on DAILP includes letters written from the Oklahoma State Penitentiary by ᎠᎹ ᎠᏛᎦ (Walter Duncan) to his mother Dollie with help from his fellow prisoner, ᎠᎵᏍᏓᏩᏗ ᏃᏈᏏ (Following Star). The letters depict Walter’s learning of Cherokee syllabary in written form with help from Star. The collection sheds light on Cherokee inmate camaraderie in the 1950s. Morell emphasized that DAILP’s interactions with the prisoners’ letters would prove to be a vital component to the completion of the musical project.

The DAILP team looks forward to the inclusion of their annotated letters within Justin Morell’s musical composition in the realm of cultural language persistence. DAILP happily invites contributions to the collections’ translations and other collaborations in the future. In fact, DAILP is implementing a Creative Commons license for scholars, composers, and content developers for those who are inspired to use these documents in their own creative ventures. The DAILP team is pleased to share in creative projects like Morell’s that seek to enable Cherokee language persistence and community. DAILP plans to continue supporting Morell’s creative project and assist in helping him achieve his mission of “celebrating the beauty and complexity of Cherokee culture and language.”